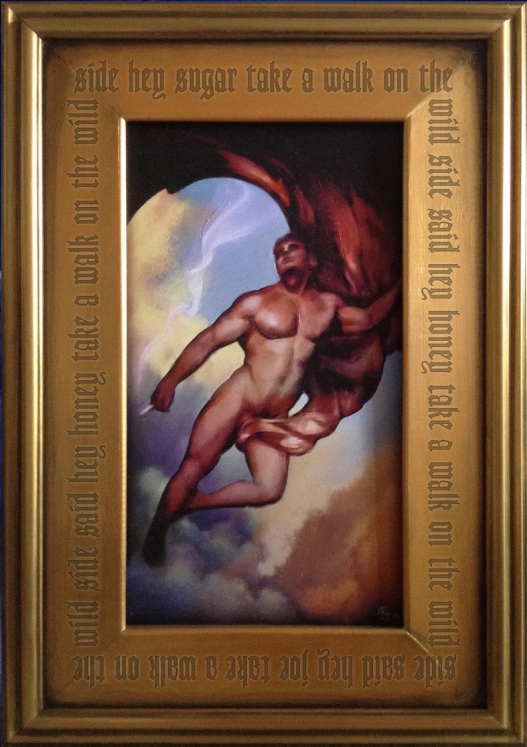 Dope Angel was originally a paper collage. Back in 1999 I tore model Steve Kenney from an old copy of Zipper magazine and cut him to pieces. Using an Estée Lauder advert from Vogue, I added the sort of renaissance-style background which best described my romanticised view of the world. Photoshop was unknown to me: the cut and paste involved actually getting your hands dirty. It’s funny how I manipulated the flowing silk and muscular limbs in exactly the same way with scissors as I would now with digital wizardry. The only difference was that I only had one copy of everything – so there was no room for mistakes. Limitation is the mother of resourcefulness, as I learnt.

I dutifully preserved my work as a grainy photograph: digital photography was in it’s infancy and had all the resolution of a Lego mosaic. Somewhere on my travels around the world, I managed to mislay both the original and the picture copy. Fifteen years later I found my ancient, rusting laptop which hadn’t been used since I was abroad. How I managed to get it working is beyond me: Widows 97 is like a history lesson of creaking hard drives and Pacman graphics. It would take 30 seconds to open a single picture, but there it was: Dope Angel! With all the finesse and clarity of a Ceefax page. You could almost see the curling paper layers (middle image above). Unfortunately my love of quality was challenged even further when I realised that I couldn’t extract the image because the laptop was obsolete tech. I had to take a picture of the tiny screen!

Originally it was meant to look like an old oil painting, so I fed the image into Photoshop to restore some detail and then produced a digital painting from the remaster. Steve Kenney would be proud.

UPDATE – This image was a winning entry in a mural competition, to be rendered on the side of The Molly House bar in Manchester’s Gay Village. Last minute jitters from the owners meant that I had a request to remove The Cigarette. I refused and told them it was actually A Joint. I was removed from the mural, which was strange considering the image would have been on the side of their… smoking verandah! A frame adorned with Lou Reed lyrics has been added, just to remind me of freedom. Real freedom.